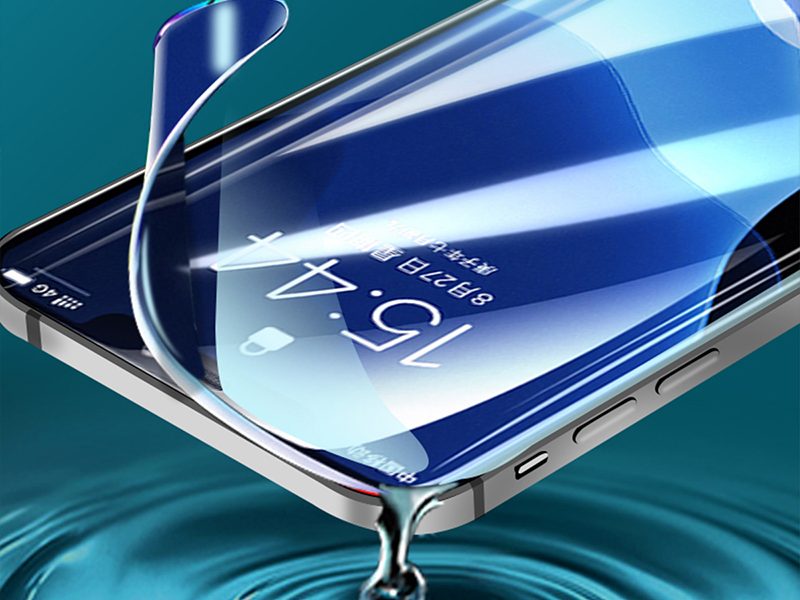 From the perspective of mobile phone film , the drop resistance is obviously the advantage of the hydrogel film (TPU ) ,because its physical properties are destined to prevent it from falling , because the impact on external forces is absorbed by its own buffering and shock absorption properties , just like The fist hits the sponge .

Although the tempered film is anti-fall , some of its shortcomings have also emerged , such as being too thick to affect the sensitivity , not easy to fit , easy to enter dust , and warped edges . Judging from the current mobile phone protective film market , two common mobile phones protective films are generally tempered glass material films and hydrogel films that are gradually becoming hot this year .

Hydraulic film and tempered film are actually not the same . The material of hydraulic film is inorganic organic composite material , which has super ductility and retraction , so ordinary scratches will gradually disappear by themselves . The hydrogel film is made of four kinds of materials , and it feels smooth to the touch . If you press it , it will have a Q-elastic feeling . Because of the PBA added to the material , it has strong adsorption and elasticity .

Advantage:Fingerprint resistance . It can automatically repair scratches , ultra-thin (especially in line with the trend of thinner and thinner mobile phones ) , and it almost feels that the film is not past without careful observation after past it . The dead corners of the curved surface of the hydrogel film are fully fitted , which perfectly eliminates the problem of white edges and warping of the curved screen .

TPU screen protectors Anti-fingerprint and anti-scratch . Compared with the hydrogel film , the tempered film that is used by the most people feels the closest to streaking , it is also very clear , it is resistant to fingerprints and scratches , and the price is not expensive . But there is one disadvantage , which is that it is too thick . The popularity of curved screens and 2.5D glass has brought new disadvantages to the tempered film in addition to being thick : because it cannot be bent , it has poor adaptability to curved screens .

Can be moved at will . In fact , the biggest advantage of the hydrogel film is that the process of sticking it can move the position at will . You can stick the mobile phone film yourself . Even if you have bubbles when you apply the film , the bubbles will disappear automatically after a day or two . Do you feel amazing ?

Drop resistance . From the comparison of drop resistance , it is obvious that the hydrogel film has the advantage , because its special properties are destined to prevent it from falling , because the impact force of external force is absorbed by its own cushioning and shock absorption properties , just like a fist hitting a sponge.