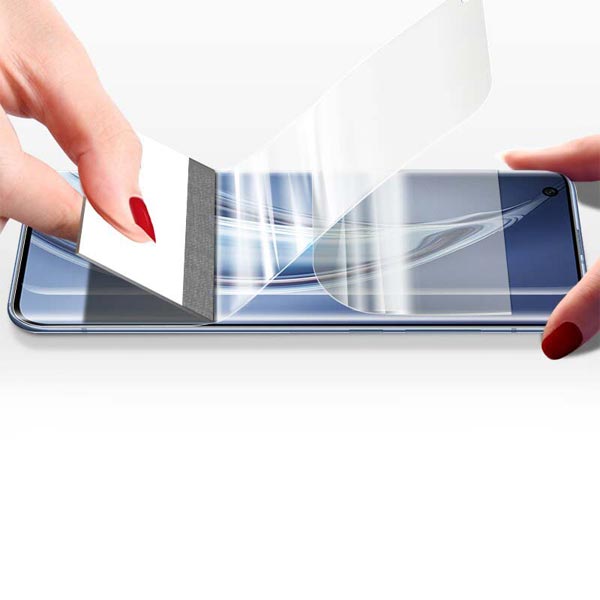 With the advent of the era of smartphones, the styles of mobile phones are becoming more and more popular. At present, many mobile phones on the market have curved screens. So which screen protector is more suitable for mobile phones with curved screens? Please read below and we will answer this question in detail.

Due to the curvature of the edge of the curved screen mobile phone, the screen protector is very difficult to fit. Sometimes it is very perfect, but after a day or two, it can be detached or bubbles will appear.If it is some poor-quality tempered glass screen protectors, there may also be problems of falling off or screen operation failure.

Because my mobile phone is also a curved screen mobile phone, I tried many kinds of screen protectors, expensive, cheap, soft film, tempered glass film, and tried them all.

The price of the edge glued tempered glass film is very cheap, but the quality is concerned. Although it can be attached to the screen of the mobile phone and no bubbles are seen, the screen operation will be insensitive, it will fall off easily, and the screen fingerprint unlocking will fail, so I quickly Just replaced the screen protector.

The second time, I tried an expensive tempered glass screen protector. Although it looked perfect when the staff helped me put it on, after one night, I found air bubbles on the edge of the screen. I tried to find a way. After the bubbles are eliminated, they will appear again shortly after. And I found that at some point I also found that the screen operation also failed. So I tried this tempered glass film for about a week and I replaced it.

For the fourth time, I used a tpu screen protector, and finally I felt that it was the right choice, because the installation of the tpu screen protector is very simple, and the most amazing thing is that the bubbles and minor scratches can be repaired automatically. The screen operation is very smooth, and it is very suitable for fingerprint unlocking, and there is no situation where it cannot be unlocked. For merchants, tpu screen protectors can also reduce inventory pressure and are suitable for any mobile phone model on the market.